“Secrets” of the stage hypnotist

“Secrets” of the stage hypnotist 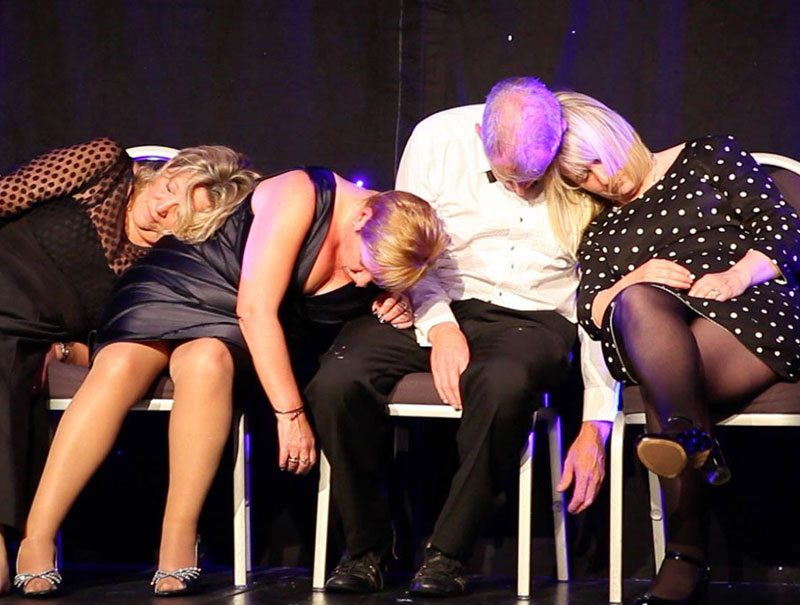 There is a lot of confusion about what a stage hypnotist does and what a hypnotherapist does. I often find it useful to allay clients’ fears at the beginning of therapy so that they can appreciate how hypnotherapy can help them…and that I won’t make them cluck like a chicken … unless they want to of course! Here I’ll look at the basics of how a stage hypnotist works and it will be very different to what you expect.

Stage hypnotists can be fun and very entertaining and as long as we realise they are entertainers, we can enjoy their performance. They are doing a very different role to hypnotherapists.
We don’t really believe that magicians have magical powers but part of us likes to think that they do. It’s much more exciting than the rather more prosaic reality. The same is true of stage hypnotists. They do not have “magical mind powers” but they do have a set of skills, tricks and techniques which when employed skilfully can seem mystical.

I want you to imagine you are in the audience of a stage hypnotism show. You are a bit of an extrovert. You want to get up there. Next to you is your friend, Sam who you’ve brought along. He does not want to go up on stage. So what does the hypnotist do? He asks for volunteers. You and your fellow extroverts eagerly thrust your arms in the air. Sam and his fellow shy guys sink deeper into their seats. The people on stage are now the very people wanting to “perform”. “Lucky” hypnotist.

So you have volunteered. You are up there. You like to “show off” a bit. There’s lots of social pressure on you to go along with this and not ruin everyone’s evening isn’t there? On stage. Lots of people looking at you. You are probably finding this all a bit unusual and confusing I expect. We find confusion intolerable and will grasp at anything or anyone to rescue us from it. Here the hypnotist has another normal human reaction to enlist. He will deliver you from confusion if you follow his suggestions. I expect you would prefer to be liked by the audience than disliked. As the audience enjoys your “performance” it feels much better to go along with it than to stand up and say “actually, I think I’ll just sit on this chair here and do nothing”.

Oh and one more thing. All this exhibitionism, lovely audience response and clear instruction is great but what is the icing on the cake? Well, you don’t even need to take any responsibility for your actions. “It was him that made me do it. I was hypnotised you see”. All that fun and no responsibility! Of course you will play along even though you may buy into it so much that you genuinely believe you were hypnotised.

So you see that a skilled stage hypnotist uses normal human reactions to create an entertaining show. A hypnotherapist is here to help you in the way you want to be helped but this is a subject for another day.

Are you stressed? Find out if you're a Monkey Junkie and what to do about it. https://together-therapy.co.uk/business-performance/stressed-you-might-be-a-monkey-junkie … #stress #Eastbourne https://pic.twitter.com/uhgrinzI1N

Have a coffee and have a browse. I'm sure you'll find something in here that will appeal to you. http://bit.ly/2o3b56c #eastbourne #mentalhealth