The “Fight or Flight” Response

The “Fight or Flight” Response Explained

In simplistic terms, the brain consists of an “old” and a “new” part. The old part developed first and this is where our automatic response to threats comes from. It also drives our emotions and instincts. The “new” part allows us to imagine and think rationally. The “old” brain responds much faster than the “new” part. If a rock is about to hit your head, you will find that the “old” brain has jolted you out of the way even before you are are really aware of what is happening. 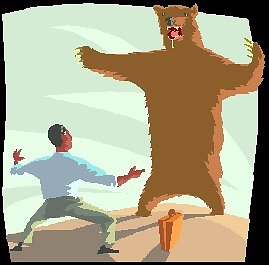 One part of this “old” brain, is the amygdala which is like the body’s radar system, constantly scanning for danger. The amygdala is itself part of the limbic system which is responsible for our “fight or flight” response.

When a threat is perceived by the amygdala, survival changes occur in the body and mind. Physically, stress hormones (adrenaline and cortisol) are released, our heart beats faster and unnecessary bodily systems such as our digestive system reduce (this is why you may lose your appetite when anxious). All this is designed to make us physically quicker and stronger.

Our minds too go into “survival mode”. “New” brain processes such as rational thinking become dangerous luxuries. We become “hyper-attentive” to any danger. All we need to do is choose (quickly and instinctively) between fight or flight. (This is why you will find it so difficult to think clearly when you are anxious).

The “Old” and “New” Brain. Anxiety in the Modern World

When the “old” and “new” parts of our brain work in harmony, the “old” brain will shoot through a burst of stress hormones and then our “new” brain catches up and rationally assesses whether it is really a threat. For instance, if you hear a loud noise, your heart may race and you may jump. Our “new” brain then catches up and assesses the situation. It realises it was just a car door slamming shut and you smile and move on.

When they don’t work well together, our “new” brain creates scary scenarios which the amygdala sees as real and activates the “fight or flight” response even though there is no threat. As our “old” brain is now hyper-attentive, it “sees” risks where there are none. Our bodies get constant streams of adrenaline and cortisol and thus our capacity for rational, calm thinking is eroded. We feel “on edge” constantly and this pressure can lead to depression.

An example could be where you were at the cinema and felt you would be sick. You were in the middle of a row and felt trapped. You imagined the embarrassment of being sick over fellow cinema goers and your amygdila picked up on this. It triggered the response and so you find yourself avoiding sitting in a middle row ever again. This reinforces the anxiety and soon you may feel anxious going to the cinema at all. Ultimately, this perceived threat may be generalised to such a degree that leaving the house at all is a threat and the thought of it triggers the stress response.

Are you stressed? Find out if you're a Monkey Junkie and what to do about it. https://together-therapy.co.uk/business-performance/stressed-you-might-be-a-monkey-junkie … #stress #Eastbourne https://pic.twitter.com/uhgrinzI1N

Have a coffee and have a browse. I'm sure you'll find something in here that will appeal to you. http://bit.ly/2o3b56c #eastbourne #mentalhealth